It’s Saturday morning here. I’ve completed(successfully) my first week of my internship. I intend to write my experiences over a series of short posts. I work with the TEC (Technology Entrepreneurship & Commercialization) Institute at FCOB (Fisher College of Business).
Day1: I was asked to head down to Mason Hall at 11.30AM on Monday (15th July). I had not yet familiarized myself with OSU campus and was advised to start by 10.30 itself tor each there on time. I was getting ready when the airport authorities called saying that they’ve found my missing luggage and they’ll come around 10.45 AM. I was worried since I didn’t want to be late on my first day. But one thing I came to know later on is that people here make no compromises on punctuality and credibility. Baggage reached on time, I made a run for it and somehow managed to reach room 256, Madison Hall by 11.27AM. #phew

Dr.Michel Camp, Executive Director, TEC Institute and Erica Waite, Program Director, TEC Institute were in the room. I went in (heart beats pumping). They were very friendly – we had a very interesting discussion. I figured that the people here have a hard time figuring out how to pronounce my first name (Rahul) and mostly give up on my second name even before trying (Raveendranath). We talked about my profile, academic background, interest in entrepreneurship, the general technology & entrepreneurial landscape of Kerala (which is of course being defined by Startup Village)  &  of India. They made me sign an agreement similar to an NDA and one which entitles TEC ownership of any ideas I may conceive during my tenure here. Then they explained the idea behind and functioning of TEC.

They are TEC Institute and TEC Academy. TEC Academy has various academic courses related to entrepreneurship – syllabus mostly designed by Dr.Camp himself. TEC Institute is where I work – it’s sort of a consulting service that provide expert analytic services (market survey, competitive analysis etc) for startups in various stages. Also, Dr. Camp is very resourceful and his networking assistance is also an added highlight. So TEC works on a lot of proprietary and confidential data which is why I had to sign the NDA. Erica also explained to me that I’ll be working on multiple projects over my internship. Since I had an IT background, they also asked me whether I’d me interested in working on a project on symantic web and ontologies – which I was very glad to do. I was handed me over a lot of resources to read through for my first assignment (an IT one) – to figure out usability improvements for a custom made project management solution for TEC.

One of the interesting questions Dr.Camp asked me was regarding my future plans in case I chose to pursue entrepreneurship – whether I’ll be interested in entrepreneurship opportunities in the US or back in India. I expressed my interest in exploring the opportunities back in India. I said that I feel there are large gaps in the socio-economic conditions of India (wrt western countries) – gaps which can be filled to an extend by leveraging  technology properly; and that I feel I have a personal obligation to give back to my country & community – contribute to its economic development as much as I can. The fact that my high school education(Jawahar Navodaya Vidyalaya) and college education(CET) was mostly funded by the government could be a reason I guess.

Afterwards, Erica showed me around the office and assigned a workspace & desktop for working. There were two other analysts working with TEC this summer – Karthik and Ajlouni, Burouj (from Jordan). I interacted with them. The rest of the first day was spend going through the documents I was given. I left the office at around 6PM. I’ve some photos of the office. 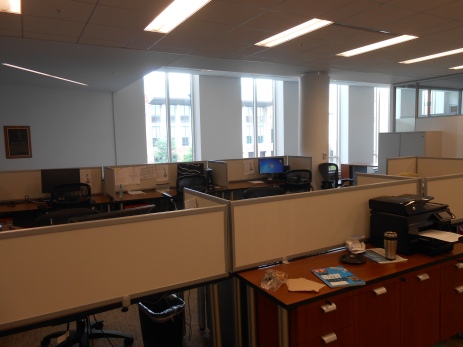 A view from office window 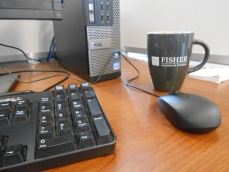 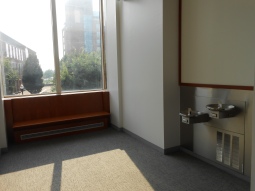 Waterholes on every floor

Bike parking and bus stop in front of FCOB

In front of Fisher