Today I attended the Ohio Linux fest 2013. It was at the Greater Columbus convention center. One key reason which drove me there was that today’s keynote speaker was Mark Spencer, the founder of Asterisk the open source PBX. Asterisk happens to be the PBX that we’re using at the back end of DialBlood. He was a much younger guy that i expected. His talk was very insightful. The way he was able to setup a sustainable commercial business (Digium – his telephony company) at the same time nurturing & growing a powerful open source project was interesting. The challenges he faced/facing were also somewhat unique:

After his presentation I went and talked to him personally, told him about what we are attempting to do with DialBlood. He was interested & asked me to mail him our details. He also suggested that Asterisk12 has features like RESTFUL web interaction that we might find handy. I also got an autograph from him.  🙂

I also attended sessions related to Ubuntu community as well as Raspberry Pi, all really interesting. There was also an exhibition where many Linux based products were demoed. One of the stalls which was put up by a company called Systems 76 impressed me. The had high end Linux machines running games like the latest version of DOTA in maximum graphical configuration. Linux gaming has apparently come a long way since I last checked! 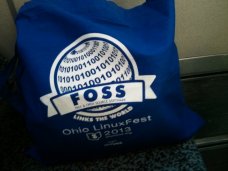 Got some goodies as well. 🙂

P.S: This is the first post I’m making from the Android WordPress app on my new phone. Please ignore typos..